*Spoiler alerts* if you don’t want to know what the gender of Baby Button is read no further!

So we had a right faff on at the ultrasound with my bladder not filling up enough, which meant buttons head was too low down in my pelvis for the sonographer to do the checks on babies head. So back into the waiting room to drink more water.

I swear I nearly weed I had drunk so much! I managed to get out of getting weighed as my bladder was so full *mini win for me* We saw the obstetrician who seemed more than happy with me weight wise anyway as in her opinion it’s any time from now if I don’t gain weight she will be concerned. So that’s fair enough nothing to worry about *my mam would say I told you so!* We have another scan in April, at 28 weeks to check the growth is OK.

The sonographer finished all of her checks and said baby seems to be absolutely fine for the things they look for. We had opted out of having the downs screening etc as it just doesn’t bother us. I found the ultrasound really uncomfortable and quite painful too as I have so much scar tissue, they have to press really hard to get the sound waves through.

Yep were having a boy! Ra-Ra was so happy which is good because last weekend she “didn’t want a poo poo brudder”, but two days ago she said “I think I would like a brudder.” So that was pretty lucky haha! 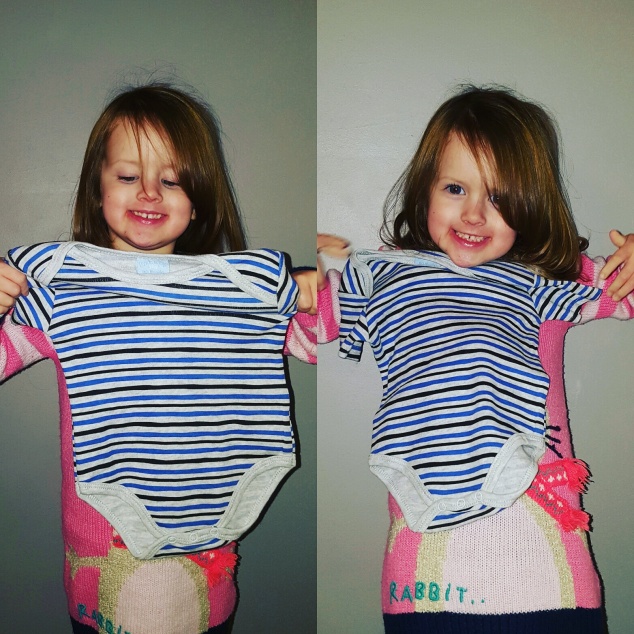 For a couple of weeks (well like the day after I wrote Hello Baby) I just had a feeling we were having a boy, I just kinda knew. Which is a good thing since I bought a 6-9mo Batman pyjama set. 00Steve is happy I think he has been quite quiet today. But from the fact he went to work and told all his friends I am pretty confident that he is over the moon!